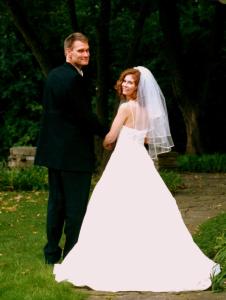 When I vowed to love Rick “in sickness and in health,” I found the words romantic.  Like many brides, I had some vague idea that long marriages always end up involving difficult times, but I had only the dimmest understanding of what I was actually promising.

We made it seven years before I learned what it means to have and to hold in sickness.  END_OF_DOCUMENT_TOKEN_TO_BE_REPLACED

In early 2009, my husband became suddenly and dangerously ill.  He was 41, in perfect health, and the father of three kids, aged 6 months to 2.5 years.  In what we think turned out to be Swine Flu (also known as H1N1), he found himself fighting for his very life.  He ended up spending 54 days in the hospital, most of them in the intensive care unit on a ventilator, a month in in-patient rehab afterwards, and several months in out-patient rehab after that.  Needless to say, this period was life changing for me, as well, and I learned quite a lot…on a number of topics.  In no particular order, here are a few of the things I gleaned during those harrowing days:

END_OF_DOCUMENT_TOKEN_TO_BE_REPLACED

Unauthorized use and/or duplication of this material without express and written permission from this blog’s author and owner is strictly prohibited. Excerpts and links may be used, provided that full and clear credit is given to Laura Goetsch and goetschblog with appropriate and specific direction to the original content.

Goetschworld: Husband really into plants, kids really into Legos. Mom really into sun.
Outtakes (You can guess who I was talking to in this photo.)
Beautiful weekend in Tucson. (Yes, the kids were there, too. They don’t like me posting pictures of them anymore.)
Progress report: winter
My oldest and I read MLK’s Letter from a Birmingham Jail yesterday together. 🔥 Dr. King is rightly remembered as a leader. He ought to be equally remembered as a writer. And a thinker. We have produced very few of his incisive eloquence and erudition. His intellect was truly staggering.
Dining room table at the end of Christmas Break. Nerf guns ✅ Pinewood derby cars nearing completion ✅ Craft supplies ✅ Oversized stuffed animal ✅ Christmas decor still in place ✅ Large box of bandaids ✅ New game ✅ Pile of unread newspapers ✅